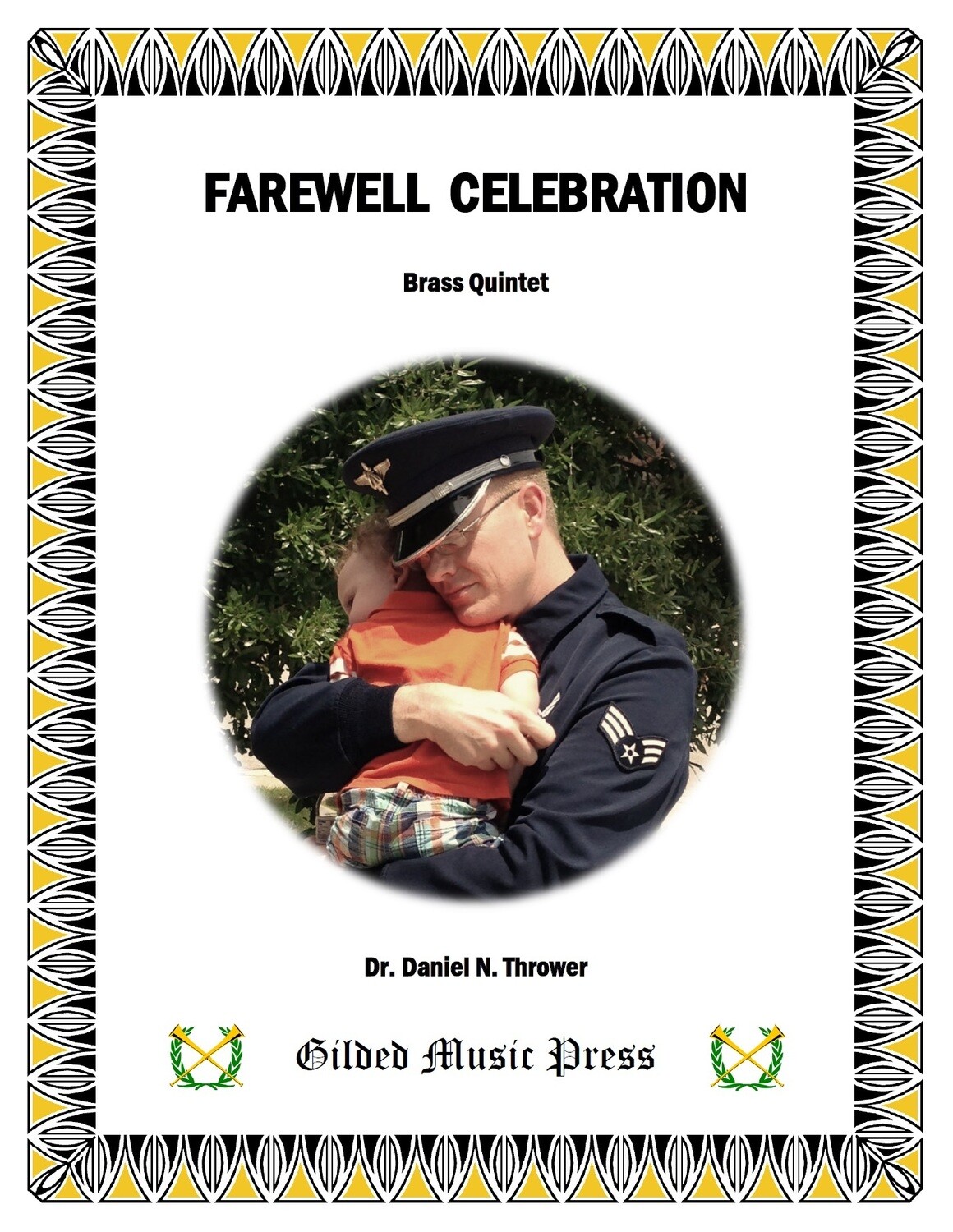 To listen while following along with the score, click here: (2) Farewell Celebration, by Dr. Daniel Thrower, for Brass Quintet - YouTube

The opening of this 4-minute piece is dance-like, intimating a celebratory mood up front—alone at first, but shared with the ensemble throughout the piece. After much celebration, the piece ends solemnly, as if giving each other final hugs and good-byes. Every Airman has a story to tell. “Farewell Celebration” is part of my story as an Airman musician. It is a fitting farewell to the Heartland of America Band stationed at Offutt Air Force Base in Bellevue, Nebraska, and to the entire American Midwest, as my family and I finalized our plans to uproot for an extraordinary three-year adventure in Asia.

Work on this composition began toward the end of July and beginning of August 2021 as a melody with instructions to be the opening of a brass quintet piece, beginning with trumpet alone. It remained in that state until January 2022 when I entered this sketch into the computer to be worked on sporadically along with several other works in progress. When I contracted Covid-19 in July 2022, all of these works and other incipient pieces received attention, but this one more than most others. In the fall, I felt an urgency to complete it as a sentimental gesture of enthusiastic good-byes due to many life changes taking place. In particular, my fourth son, Paul, was departing for two years for Brazil. I was compelled to complete this work before he left on October 17, 2022, which I accomplished the day prior to his departure.

In addition to Paul’s farewell, two co-workers with whom I had worked closely in the Air Force brass quintet called “Offutt Brass,” were also moving on with new exciting chapters in their lives. MSgt Ben Kadow, our fantastic trombonist, had received an assignment to move to Germany, leaving us on November 8. And MSgt Ryan Heseltine, our unparalleled French horn player, retired at the end of the year. On top of all that, in September I was given an assignment to move to Japan the following summer. Some farewells are more difficult to endure than others, though all seem to have varied brands of profound emotion. In contrast to saying good-bye to a loved one who passes away, all of these farewells were joyful, albeit poignant.

“Farewell Celebration” is dedicated to my son Paul, to my outstanding professional colleagues, Ben Kadow and Ryan Heseltine, and to all our friends and family members who we left behind as we moved to Japan.