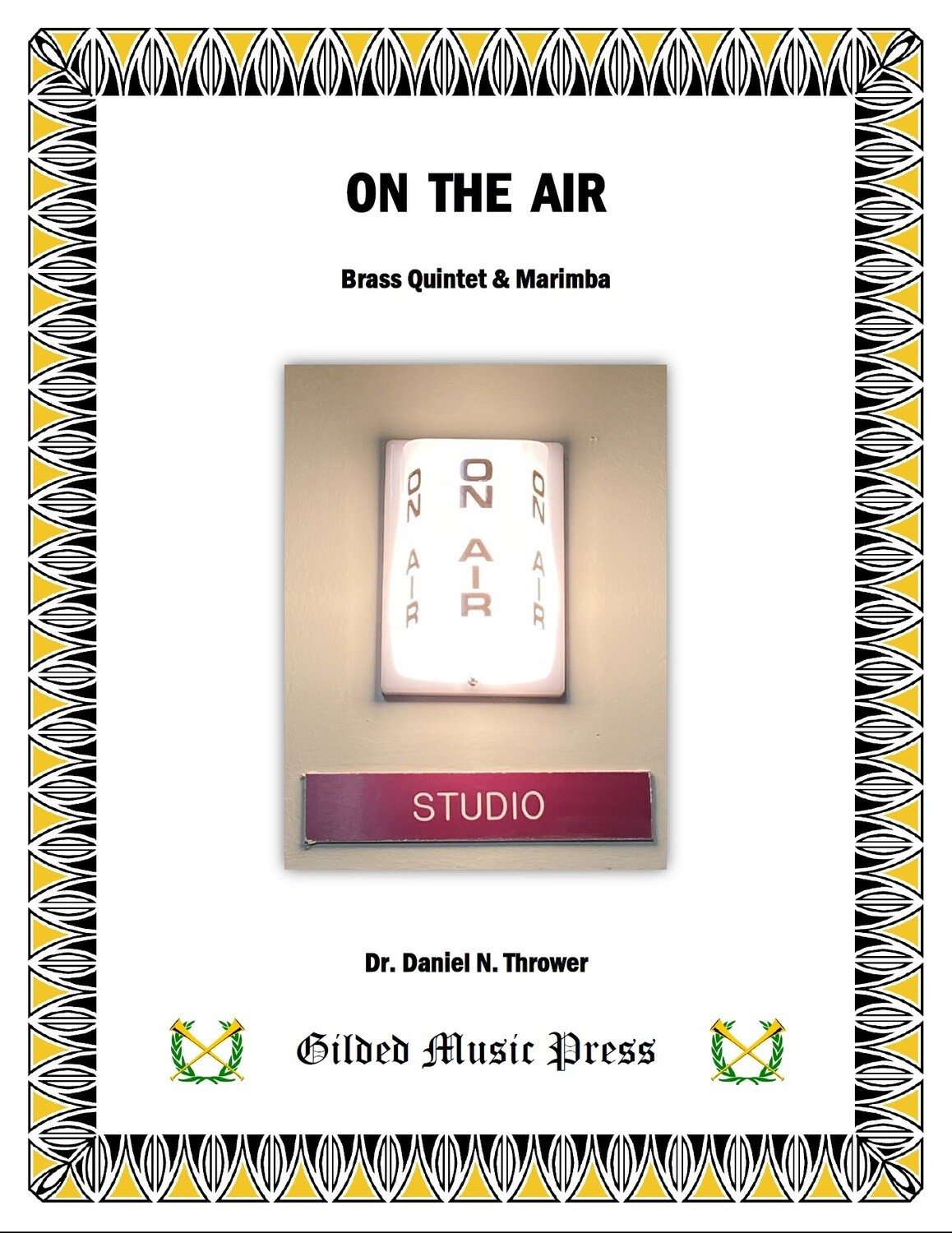 To listen while following along with the score, click here: (2) On the Air, Dr. Daniel Thrower, for Brass Quintet and Marimba - YouTube

The year 2022 marked a milestone for the United States Air Force, as the world’s greatest airpower celebrated 75 years of air and space dominance. Omaha’s classical radio station was also celebrating a milestone year with its 50th anniversary. The resulting composition, cleverly titled “On the Air,” was written to observe both momentous anniversaries.

The introduction plays on a cleverly adapted four-bar rhythmic motif that repeats, each time growing in intensity, conjuring images of a radio newsroom about to air breaking news. This opening rhythm is derived from Morse code letters K, V, N, & O (__ . __ | . . . __ | __ . | __ __ __), which is Omaha’s classical radio station. The main melodic theme begins after the intense introduction, stemming from the KVNO motif, and exudes energy worthy of the greatest of celebrations, replete with trumpets punctuating the strains with fanfare-like figures. After the KVNO transition to an exciting new key, the theme occurs a second time in the trumpets before simmering down to the second theme in a slower tempo, intended to be retrospective of the last 75 and 50 years of the two celebrating entities. In homage to the conflicts, sacrifices, and losses during 75 years of Air Force history, this melancholy melody in the horn repeats in octaves with horn and tuba, contrasting with the opening jubilation. However, without starkly “snapping back” to a celebratory mood, the original theme gently makes its reentry in the form of a mellow waltz with duetting trumpets, as a hopeful look to the future. The second iteration of the waltz brings back hints of the Morse code letters in the introduction, as underlying accompaniment to build energy and drive. It pivots fully with the KVNO introductory motif that changes keys while exploding with the recapitulation of the original full theme, intensifying the celebratory mood for the present festivities. The waltz version of the theme comes back, fragmented, hinting toward a fugato treatment. The non-fugal fragmentation is laced with virtuosically ornamented accompanimental lines reminiscent of a British-style brass band, and quickly settles into a full climactic presentation of the waltz iteration. The work ends full circle, with repeated KVNO rhythmic statements, in grand fashion for a firework finale.