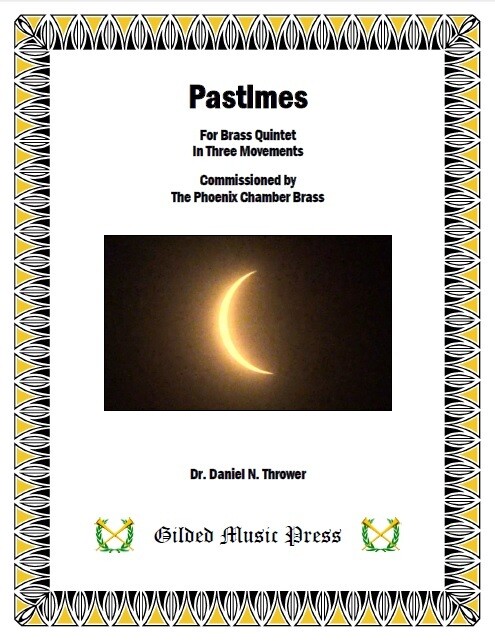 Pastimes (Brass Quintet, 3 movements). Listen along with the score here:

This three-movement, thematically cyclical composition began in 2006 with unused material originally intended for Dr. Thrower's “Concerto for Trumpet.” The opening notes of the quintet’s third movement, for example, were supposed to open Movement I (entitled “Fe,” or “Faith”) of the concerto. With too boisterous of a mood, however, the music gave the effect of a game show theme rather than a deeply religious metaphor. The beginning several measures were filed away, re-orchestrated for brass quintet under the title “Cosmology.” In this state it awaited its completion until the concerto was finished.

Geology is a fulfilling pastime. During the time of composition Dr. Thrower had recently purchased a well-written Geology book with many full-color photographs. That book inspired hours of one-on-one time between him and his children, as well as some short Geological hikes in the foothills of Ahwatukee (southern Phoenix).

“The Wu Li Dance,” parodying a book’s title, “The Dancing Wu Li Masters” by Gary Zukav, and is the major source of what Dr. Thrower learned about Quantum Mechanics. “Wu Li” is the Chinese term for Physics, and is literally translated as “patterns of organic energy.” Chinese masters of a discipline do not “teach” the subject to their students; rather, they lead the students to discovery and to further questions—an approach akin to dancing. The use of all conical instruments (flugelhorns rather than trumpets, and euphonium rather than trombone) augments the otherworldly affect, and provides a pleasing contrast to the outer movements to symbolize the perplexing novelty of what the human race is processing through exploring the “new physics.”

Cosmology, or the study of the cosmos, is indeed one of Dr. Thrower's favorite pastimes. He passively collects photographs of galaxies, planetary nebulae, human space exploration, planets, comets, moons, and everything else extraterrestrial. The cover photograph of the 2017 US eclipse was taken by him. The third movement, "Cosmology," opens with musical pictures of our life-giving, average-sized, middle-aged, yellow star that we call “Sun,” and continues with an aural “view” of the planets and their moons, replete with sliding Doppler-esque motifs, with optional slide trumpet and trombone, that the composer associated with orbits.